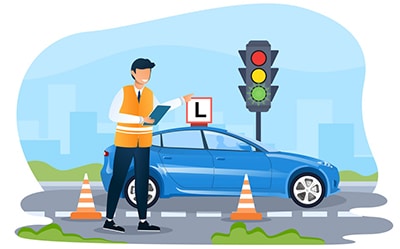 If you’re planning to acquire a driver’s license in Abu Dhabi, you must pass the driver’s test. Of course, most examiners will evaluate your driving skills based on how many mistakes you make.

Believe it or not, most candidates fail the Abu Dhabi driving test because they’re too nervous behind the wheel. It’s like a ripple effect; if you’re nervous, you’re more likely to forget the rules and make silly mistakes. For that reason, we recommend you take the driving test after you’ve done the assessment test.

Fortunately, the driving school instructors in Abu Dhabi will advise you when to book a road test appointment based on how you performed during the assessment test.

Besides that, if you want to reduce your anxiety, you should make sure you sleep at least 8 hours the night before the driving test. Also, it would help if you avoid drinking too much coffee or energy drinks since they tend to make you jittery and nervous.

Most candidates get an automatic fail during the Abu Dhabi driving test because they made a rolling or incomplete stop. This happens when you come across a stop sign, but you don’t stop behind the demarcation line.

In fact, you should wait for at least 3 or 4 seconds when you encounter a stop sign and proceed when the road is clear.

Driving Too Fast or Too Slowly

Most candidates make the mistake of driving too slow while trying to avoid the speed limit. Unfortunately, this could get you an instant fail in Abu Dhabi. A good idea would be to make sure you don’t drive less than 5 km/h below the posted speed limit on most urban roads; unless you’re trying to avoid a hazard. However, if you’re on the freeway, you shouldn’t drive less than 80 km/h.

Another thing; don’t go beyond the speed limit by even 1 km/h.

If the examiner catches you off guard looking at your phone while you’re behind the wheel, you will fail the test. Since you don’t want that to happen, you should switch off your phone before you start the Abu Dhabi driving test; it will take 10 to 30 minutes.

Besides that, distracted driving could also involve changing the stereo or being absent-minded. Of course, the examiner probably won’t notice if you’re absent-minded but if you’re given instructions and you don’t comply, you could flunk the test.

Most new drivers tend to slightly move out of their lane when making a sharp turn over 90 degrees. Remember to signal and slow down before you encounter a sharp turn. In addition to that, keep the vehicle at the center of the lane. Once you’re out of the turn, you can accelerate.

If you’re asked to change lanes, don’t forget to turn on your indicator, check your side and rearview mirrors. Also, you should exaggerate your shoulder checks to make sure your examiner notices you’re attentive on the road. Otherwise, if you switch the lanes without checking for blind spots or turning on your signals, you could get an instant fail.

Besides that, never change lanes when driving through a roundabout or intersection.

Most candidates make the blunder of following other cars too closely, especially during a traffic snarl-up. Even if you get away with it, the examiner will give you an instant fail if you rear-end another vehicle.

However, you can avoid such an incident by making sure there is at least 3 or 4 seconds of distance between your car and whoever is in front.

Not Yielding to Passengers

When you encounter a zebra or crosswalk, you should first wait for the passengers to cross the road. Don’t drive until the last passenger has stepped on the sidewalk.

Beyond that, make sure you slow down when you drive through a school zone, construction zone, freeway, or residential street. If you notice a school bus, you should stop and wait for all the children to unload and cross the road.

Not Listening to Your Examiner’s Instructions

For that reason, if you missed out on instruction, it’s important to ask the examiner to clarify. Try our Abu Dhabi Driving Theory Test to refresh your knowledge.